Central Jamaica Conference (CJC) proved they knew more about the history and doctrines of the Seventh-day Adventist Church in Jamaica by finishing ahead of the other four Conferences in the Jamaica Union Conference (JAMU) Heritage Quiz finals held on Saturday, November 21, at the Northern Caribbean University (NCU) Gymnatorium in Mandeville, Manchester. 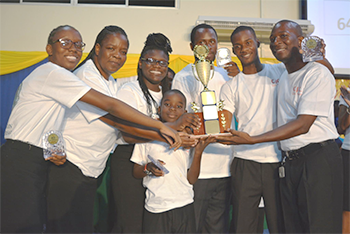 the CJC team pose with their trophy.

Members of the CJC team points to their final score of the quiz.

The event brought to a close the activities which marked the 125 Years of Adventism celebrations organized by JAMU. It was organized to create awareness of Seventh-day Adventist doctrine, and its history in Jamaica among church members, especially the youth.
“The quiz was a structured and systematic approach adopted by the Church in the Jamaican Union to teach the members the fundamental doctrines of the Church and transmit the rich heritage and history of the Church to its members and stakeholders,” said Pastor Everett Brown, president of the Adventist Church in Jamaica.
“Having witness the finals,” Brown continued, “I am confident that the interest that was generated with those who participated will motivate and encourage others to be involved in the mission of the Church. Therefore, we hope that this will be the start of what will become a part of the annual calendar of events in the Jamaica Union.”
Each of the five Conferences in Jamaica was mandated to organize heritage quiz competitions among their churches and districts in order to identify persons to represent their conference in the finals.
The CJC team was made up of mostly persons from the Sydenham Church. The team included Javavier Blake, who is the youngest member of the team at age 7, Dorrethea Grant, Jhanella Henry, Murray Bennett, Romaine Grant and team captain Joycelyn Brown-Kerr. 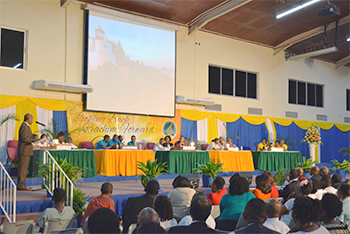 Pastor Astor Bowers, Family Ministries Director of Jamaica Union and the person who supervised the competition from the Union said, “all teams are winners this evening. There are no losers because all will receive an incentive for their participation.”
In responding to the question posed by Pastor Bowers to each team, “how have you benefited from this competition?”, Mrs. Joycelyn Brown-Kerr said, “we were tremendously blessed for participating and we hope that more of these activities will take place in the local church, especially during our A.Y. Services.”

Seventh-day Adventist beliefs are meant to permeate your whole life. Growing out of scriptures that paint a compelling portrait of God, you are invited to explore, experience and know the One who desires to make us whole.